We Rise With Yazidi Women! One Billion Rising & Yazda Call on the World for Global Solidarity With and For Yazidi Women on 3 August 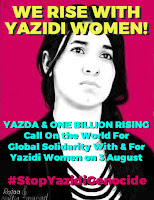 This 3 August marks the two-year anniversary of the brutal attack of the Yazidi people in Sinjar Province in the Northern region of Iraq, Two years since IS or ISIL (also known as ISIS or Daesh) stormed towns, villages, and historic homelands of the ethno-religious group, killing over 5,000 men and elders, enslaving over 7,000 women and children and displacing over 400,000 more. Two years since the humanitarian crisis in which thousands of internally displaced Yazidis were trapped on Sinjar Mountain, surrounded by Isis fighters determined to exterminate the indigenous group, dying of exposure and dehydration. Two years since the ongoing genocide of the Yazidi people began, including the desecration of homes, holy sites and women's bodies.
The recently published Chilcot report in the UK, which revealed that former UK Prime Minister Tony Blair, and his major allies - including former US President George Bush had illegally waged war in Iraq in March 2003 and militarily occupied it - further reiterates the connection that the Iraq War contributed to the rise of IS or ISIL in the region.
Nadia Murad is a 23-year-old victim of Isil's crimes in Iraq and one of the thousands of Yazidi women who were abducted and enslaved by IS or ISIL. She was brutally raped by more than 12 members over a period of three months and was among the more than 5,000 Yazidi women taken captive when IS or ISIL swept through the group's communities in Northern Iraq. After her escape, Nadia spoke out about her horrific experiences at the hands of IS or ISIL fighters to draw attention to the ongoing genocide. She has described how she and other young women were forced to pray before they were raped, and how they were treated as they were bought and sold like "sabia" - slaves.
"We were not worth the value of animals. They raped girls in groups, They did what a mind could not imagine. They commit rape and genocide crimes in the name of Islam. When they took me to Mosul to rape me, I forgot about my mother and brothers. Because what they were doing to the women was more difficult than death" - Nadia Murad
YAZDA is a global Yazidi organization who provides support for the victims of the genocide.
ON 3 AUGUST, WE CALL ON THE WORLD TO SHOW SOLIDARITY FOR NADIA MURAD AND THE THOUSANDS OF YAZIDI WOMEN AND GIRLS SOLD AND CAPTURED AS SEX SLAVES - AND CALL FOR THE IMMEDIATE RELEASE OF THE CAPTURED 3,000 YAZIDI WOMEN.
WE CALL ON THE WORLD TO HONOR THE GENOCIDAL ATTACK ON SINJAR TWO YEARS AGO. WE AS A GLOBAL COMMUNITY, MUST KEEP THEIR STORIES AND THEIR SITUATION VISIBLE WITH THE STRENGTH OF OUR SOLIDARITY.
ORGANIZE SOLIDARITY EVENTS AND ACTION IN YOUR COMMUNITIES. Here are some suggested actions:
MARCHES. VIGILS. WALKS. SOLIDARITY VIDEOS AND PHOTOS
SHOW YOUR SOLIDARITY ONLINE ON SOCIAL MEDIA.  LETS FILL THE GLOBE ONLINE WITH OUR SUPPORT FOR OUR YAZIDI SISTERS AND OUR DEMAND FOR JUSTICE FOR THEM.
USE THE HASHTAG: #StopYazidiGenocide
READ more about the context of the Yazidi genocide >
Posted by dknit at 7:50 PM