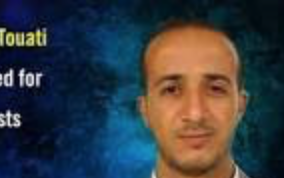 Merzoug Touati began a hunger strike on 8 July in protest at his recent unfair conviction on charges of sharing intelligence with a foreign power “aiming at harming diplomatic ties" and "incitement to gatherings and sit-ins in public spaces". The charges were based solely on the peaceful exercise of his right to freedom of expression, specifically a Facebook post that called for protest against a new law and a video interview with an Israeli spokesperson posted on YouTube that was critical of the Algerian authorities.

Merzoug Touati has been held in solitary confinement since he started his hunger strike on 8 July, in Oued Ghir prison, Béjaïa. According to the UN Standard Minimum Rules for the Treatment of Prisoners (Mandela Rules), this amounts to prolonged solitary confinement and as such constitutes a form of torture or other ill-treatment. According to his lawyers, he is physically weak and the isolation has taken a heavy toll on his psychological well- being. Although the prison administration provides him with unlimited quantities of water and sugar on a daily basis, he is forced to pay for them since he is in isolation.