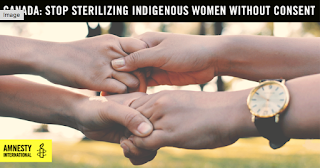 When 29-year-old Lisa* entered a Saskatchewan hospital to give birth in 2001, she could never have expected her doctor would also perform a tubal ligation against her will, leaving her unable to have more children.

Yet, that is exactly what happened -- and Lisa* is not alone.

Across Canada, and as recently as 2017, Indigenous women report being forcibly or coercively sterilized after giving birth. Some women were incorrectly told the procedure is reversible. Others were separated from their babies until they consented to a tubal ligation surgery.


Today, on the International Day for the Elimination of Violence Against Women, will you call on Prime Minister of Canada Justin Trudeau to make sure that not one more Indigenous woman is sterilized without consent?