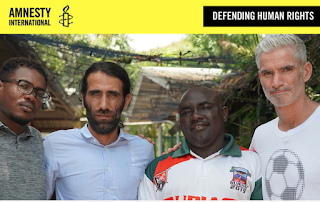 I am writing to you from Port Moresby where we have spent the past few days meeting with many of the refugees and people seeking asylum sent here more than seven years ago by the Australian Government.

If all goes well, by the time you read this, we will be back in Australia, safe with our families and friends.

The men here have no such opportunity. It’s a human crisis that has shocked me to the core. Just a handful remain on Manus Island now, the rest scattered throughout Port Moresby, recognised as one of the most dangerous cities in the world.

I have met mostly young men in their late 20s or early 30s. Though they came here as teenagers, in the prime of their life, their youth has been stolen. Hopes of going to university, starting their careers, having a family... all lost to them. They are doctors, musicians, marketing executives, social workers and even athletes.

CLICK HERE to TAKE ACTION
Posted by Melody Scherubel at 9:27 AM