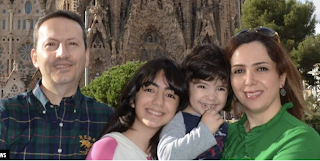 Responding to news that Ahmadreza Djalali, an Iranian-Swedish specialist in emergency medicine, has been transferred to solitary confinement in Evin prison and told by the prosecution authorities that his death sentence will be carried out imminently, Amnesty International’s Deputy Director for the Middle East and North Africa, Diana Eltahawy, said:

“We were horrified to learn that the authorities have instructed the office in charge of implementing sentences to transfer Ahmadreza Djalali to solitary confinement and implement his death sentence no later than a week from 24 November.

“It is appalling that despite repeated calls from UN human rights experts to quash Ahmadreza Djalali’s death sentence and release him, the Iranian authorities have instead decided to push for this irreversible injustice. They must immediately halt any plans to execute Ahmadreza Djalali and end their shocking assault on his right to life.

Posted by Melody Scherubel at 1:00 PM