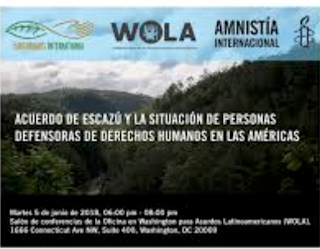 On 22 September, the nephew of Rubén Areiza, a member of the Rios Vivos Movement (Movimiento Ríos Vivos Antioquia, MRVA), was shot death by unidentified men while returning from a sport event in the Briceño municipality, Antioquia department, northwest Colombia. Another man was injured in the attack. On the same day, the son of a former member of MRVA was killed with a sharp object in the Valdivia municipality, also in Antioquia.

Posted by Melody Scherubel at 8:10 AM