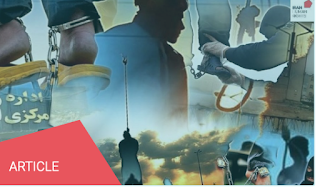 According to the Iran Human Rights statistic department, at least 38 people were executed in August 2019 in Iran, including two public hangings and 36 executions inside prisons.

Most of those executed (30), were sentenced to qisas (retribution in kind) for murder charges. Six others were executed for drug-related charges and 2 for Moharebeh (waging war against God).

Iranian officials or media have only announced 13 executions in August 2019. The rest were confirmed by Iran Human Rights (IHR). Only unannounced executions confirmed by two independent sources are included in our reports. Therefore, the actual number of executions may be even higher than reported.

The number of executions in August 2019 shows a rise compared with the same period last year. In August 2018, at least 20 people were executed in Iran. Moreover, 185 people have been executed between January 1 and August 31, 2019. This figure also shows a rise compare to the same period last year which 165 executions were recorded.

Posted by Melody Scherubel at 3:22 PM