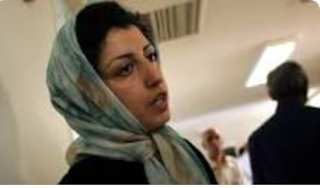 Iran has released Narges Mohammadi, a prominent human rights activist who campaigned against the death penalty.Mohammadi, arrested in May 2015, was freed late on October 7 after her 10-year prison sentence had been reduced.Judiciary official Sadegh Niaraki was quoted by the semiofficial ISNA news agency as saying that Mohammadi was released based on a law that allows a prison sentence to be commuted if the related court agrees.

Posted by Melody Scherubel at 12:45 PM