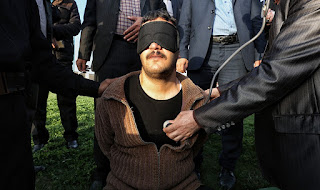 " According to reports by Iran Human Rights (IHR), 239 executions were carried out in Iran in the first six months of 2017. Among them were three individuals who were under the age of 18 at the time they allegedly committed the offence they were sentenced to death for.

One of the juvenile offenders was reportedly executed in Karaj Central Prison for a murder crime he allegedly committed 30 years ago at the age of 16. The other two juvenile offenders were identified as Arman Bohr Asemani and Hassan Hassanzadeh."
Click here for entire article.
Posted by dknit at 12:12 PM