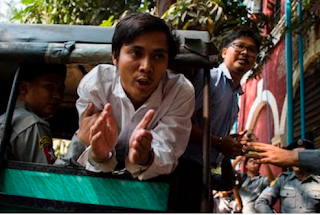 
Two Reuters journalists are facing up to fourteen years in prison for reporting on the Rohingya crisis in Myanmar’s Rakhine state. Wa Lone and Kyaw Soe Oo were arrested in December, and held without access to lawyers, family members or the outside world for two weeks.

There has been an erosion of the space for a free press in Myanmar, where journalists and other media workers face ongoing restrictions in connection with their work. Wa Lone and Kyaw Soe Oo’s arrest appears to be aimed at preventing them, as well as other journalists, from independently reporting on the Rohingya crisis.

Journalism is a peaceful act of bringing information to light, and for the Rohingya crisis it is essential. The ongoing military campaign against Rohingya Muslims has been called “a textbook example of ethnic cleansing” by the United Nations.