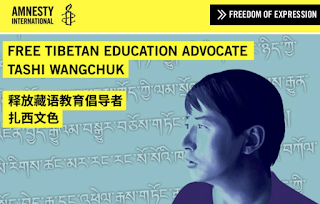 
Tashi Wangchuk is facing 15 years in prison for advocating for Tibetan languages to be taught in schools.

Tashi wants Tibetan children to learn their native tongue in Chinese schools, as well as the Mandarin they currently learn.

For his peaceful advocacy to keep the Tibetan culture alive, he’s facing 15 years in prison.

In January 2016, Tashi was taken into custody and then ‘formally’ arrested two months later on suspicion of “inciting separatism”. The authorities have accused him of attempting to discredit the Chinese Government’s international image.

Tashi should be set free immediately.

Posted by Melody Scherubel at 7:53 AM