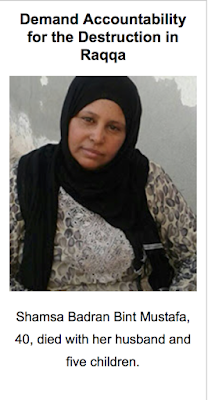 Last year, the US-led Coalition killed entire families in Raqqa, a city in the North East of Syria.

In June 2017, the Coalition - including the US, France and UK - launched a military operation to oust the armed group calling itself the Islamic State from its so called “capital”.

But instead of just targeting Daesh, they caused the deaths of hundreds and injury of thousands of civilians, and destroyed much of the city.

Our researchers visited Raqqa, and reported a level of destruction beyond anything they have seen in decades of covering the impact of wars. Homes, private and public buildings and infrastructure were reduced to rubble, or damaged beyond repair.

CLICK HERE to TAKE ACTION
Posted by Melody Scherubel at 7:44 AM