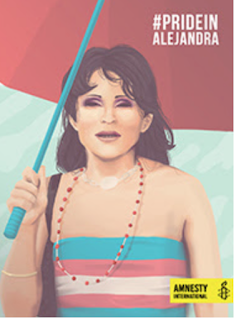 Alejandra is a transgender woman from El Salvador who fought for the rights of transgender people in her home country for over a decade. Her transgender identity resulted in repeated sexual assaults and abuses from gangs and Salvadoran military personnel. After enduring these attacks she was forced to flee her home and request asylum at the U.S.-Mexico border. But instead of helping her, the U.S. Government put her behind bars.

Now she is living at the Cibola detention center in New Mexico, despite the fact that she has family in the U.S. willing to host her. It is cruel and unnecessary for Immigration and Customs Enforcement (ICE) to detain people fleeing to the U.S. in search of safety from persecution and violence — including brave people like Alejandra.

Posted by Melody Scherubel at 12:40 PM