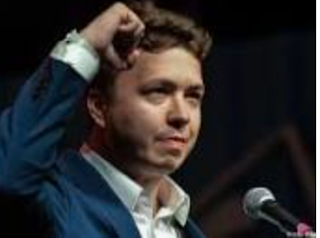 Exiled Belarusian journalist and government critic, Raman Pratasevich, was unlawfully arrested on May 23, 2021 by the Belarusian authorities along with his partner Sofia Sapega, a Russian national.

Their Athens-Vilnius flight was diverted and forced to land in Minsk under false pretext. Raman Pratasevich was wanted by the Belarusian authorities on trumped-up “terrorism” charges solely for his journalistic work.

If convicted, Raman Pratasevich is facing up to 20 years' imprisonment. A televised “confession” may indicate torture and other ill-treatment.

Posted by Melody Scherubel at 7:25 AM