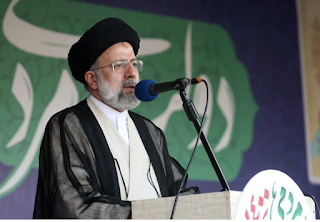 “That Ebrahim Raisi has risen to the presidency instead of being investigated for the crimes against humanity of murder, enforced disappearance and torture, is a grim reminder that impunity reigns supreme in Iran.

In 2018, our organization documented how Ebrahim Raisi had been a member of the ‘death commission’ which forcibly disappeared and extrajudicially executed in secret thousands of political dissidents in Evin and Gohardasht prisons near Tehran in 1988. The circumstances surrounding the fate of the victims and the whereabouts of their bodies are, to this day, systematically concealed by the Iranian authorities, amounting to ongoing crimes against humanity.

Posted by Melody Scherubel at 3:02 PM