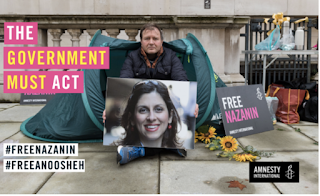 Nazanin Zaghari-Ratcliffe’s husband, Richard Ratcliffe, has begun another hunger strike outside the Foreign, Commonwealth & Development Office. He is demanding urgent action from the government over his wife’s continued detention in Iran.

Richard is now entering day 12 of his hunger strike. This form of protest is distressing and risky and at this point, Richard is already feeling his energy levels dipping.

Posted by Melody Scherubel at 8:48 AM