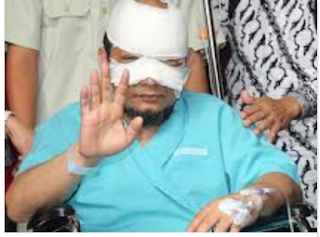 Novel Baswedan, a prominent investigator for the independent state anti-corruption commission (Corruption Eradication Commission, or KPK) has had charges filed against him for criminal defamation proceedings under Article 27(3) of Law No. 19/2016 on the Electronic and Information Transaction (ITE). The allegations are with regard to an email that Novel Baswedan, in his capacity as KPK’s workers’ union representative, criticised the leadership of the current KPK’s director of investigation unit and questioned the appointment of a KPK police investigator, claiming that it did not comply with the KPK’s internal procedures.
Walking home from Morning Prayer on 11 April 2017, Novel Baswedan had a vial of hydrochloric acid thrown into his face by two men on a motorcycle. At the time of the attack he was leading the ongoing investigation into a misappropriation of funds for an electronic ID cards project, in which members of parliament and high-ranking government officials are implicated. Due to severe damage to his corneas, Novel Baswedan is currently undergoing intensive treatment in Singapore, and is expected to remain there for another three to four months.
There have been no developments in the case of the acid attack since President Joko Widodo summoned the Chief of the National Police in late July for a press conference and a sketch of the suspects was made public. The lack of progress by the police in investigating the acid attack is in direct contrast to their swift response to the claims of defamation, demonstrating that the current approach taken by the police in their investigation into this case, and other attacks on other human rights defenders in the country, is insufficient.
CLICK HERE to TAKE ACTION
Posted by Melody Scherubel at 10:51 AM