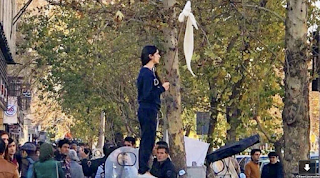 About one month after a girl showed her civil disobedience by removing her scarf at Tehran’s Revolution Street, several women have in recent days replicated her action to show their protest against the compulsory hijab (Pictures).

According to unconfirmed reports, several of these women have been arrested. Iran Human Rights (IHR) calls on the world community to show its solidarity with Iranian women's struggle against forced hijab.

IHR spokesman Mahmood Amiry-Moghaddam said, “By showing solidarity, the world community can prevent Iranian authorities from using violence and detention against women who fight for their dignity and show civil disobedience in the most peaceful way.”

Posted by Melody Scherubel at 8:15 AM