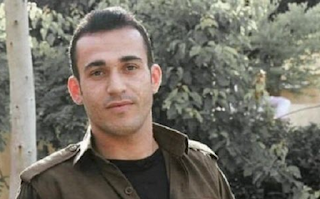 
Ramin Hossein Panahi, a 22-year-old man from Iran’s Kurdish minority, started a hunger strike on 27 January after he learned that he had been sentenced to death in connection with his membership of the armed Kurdish opposition group Komala. On 31 January, a Ministry of Intelligence official visited him in prison and said that his death sentence would be commuted to imprisonment if he agreed to make televised “confessions” denouncing Kurdish opposition groups as “terrorists”. When he refused, the intelligence official apparently became enraged and said that he would pay with his life for his “stubbornness”. Ramin Hossein Panahi was then transferred to solitary confinement where he now remains. There are fears about his health as he suffers from persistent headaches and a kidney infection, possibly resulting from torture. Following his arrest on 23 June 2017, he was forcibly disappeared for four months.
CLICK HERE to TAKE ACTION
Posted by Melody Scherubel at 7:30 AM