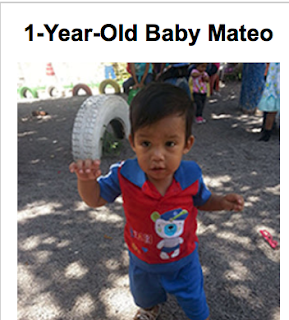 
In November, Jose D.F. presented himself at the United States border with his 1-year-old son, Mateo, and immediately requested asylum. Jose and baby Mateo were fleeing the threat of targeted killings in their home country of El Salvador, and Jose and his wife made the impossible decision of splitting up the family so that Jose D.F. and Mateo could seek asylum and safety in the United States.

After spending several days in a detention center with Customs and Border Patrol, border patrol officers transferred Jose and baby Mateo to Immigration and Customs Enforcement (ICE) agents. These agents denied Jose’s requests to use a phone, told him that his asylum claims would be compromised if he refused to surrender his son, and demanded baby Mateo be given up to ICE agents.

Baby Mateo, who has been forcibly held in foster care since November, has since been released to his mother.  Unfortunately, his father Jose remains in a detention facility in San Diego, despite following all rules and procedures.

Jose D.F. and Mateo’s experience is a cruel violation of international immigration detention standards by failing to prioritize and facilitate family unity.  ....the Department of Homeland Security has considered making family separation the official policy for all asylum seekers who approach the border.

Posted by Melody Scherubel at 8:08 AM