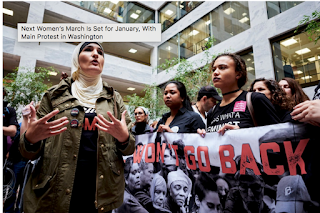 After the Supreme Court nomination of Judge Brett M. Kavanaugh advanced on Friday to a vote by the full Senate, organizers of the Women’s March said messages came pouring in.

The confirmation proceedings, particularly the testimony of Christine Blasey Ford, who accused Judge Kavanaugh of sexual assault decades ago, rallied women who themselves had been sexually assaulted or harassed.

Even as the Senate waits for a renewed F.B.I. background check before a final vote on Judge Kavanaugh, who has denied the accusations, many saw the support for him as an endorsement of a culture that fosters and allows sexual misconduct.

People were “enraged,” Linda Sarsour, a chairwoman of the Women’s March, said on Saturday.

“Our email inboxes were full: ‘Women’s March, where are you? When are we marching? Tell us when? Tell us where?’” she said.

Posted by Melody Scherubel at 3:33 PM