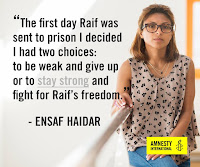 "By now, millions of people around the world have come to know my husband Raif Badawi’s name. All of this attention is encouraging, but the reasons why have shocked me to my core.
Raif was arrested in our country Saudi Arabia three years ago today just because he expressed his ideas – he took to his keyboard and started his own website.
He is a person who loves life and adores freedom, and for this he has received the harshest of sentences. He has been locked up since 2012, serving a 10-year prison sentence, and he has already suffered 50 lashes in public out of an unspeakably cruel 1,000 lashes – too much for any person to bear.
Since Saudi Arabia’s Supreme Court recently upheld his sentence, with no room for appeal, Raif still has the threat of 19 more flogging sessions hanging over him, despite his poor health. All of this because he expressed himself."


Click here for entire article.
Posted by dknit at 9:10 PM