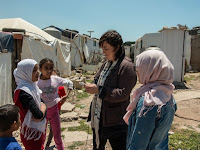 Amnesty International European Institutes Office
June 20, 2015
"This Monday, Amnesty International warned that the global refugee situation has not been this dire since the end of the Second World War 70 years ago. The crisis in Syria is the biggest humanitarian catastrophe of our time, with four million refugees struggling to survive in neighbouring countries and another 7.6 million people displaced within its borders. Less publicised conflicts are also devastating; three million refugees are fleeing human rights abuses in South Sudan, Nigeria, Burundi and other parts of sub-Saharan Africa.
These people are doing what any of us would when trapped in intolerable circumstances: they flee. To achieve this, they will risk everything. Sometimes the only thing they have left to risk is their lives.
The world’s wealthiest countries are doing shockingly little to help people leave places where their rights and lives are at risk. The international community offers money, but not enough to deal with the unprecedented scale of the crisis. More importantly, wealthy countries are miserly when it comes to offering refugees a new home, in the form of resettlement programs.
This means that the countries shouldering the responsibility for this massive crisis are generally the ones least capable of doing so; 86% of the world’s refugees live in developing nations. Turkey, Pakistan and Lebanon each host more than one million refugees. The global number of resettlement places for refugees from Syria represents a little more than 2% of those living in the neighbouring host countries. And in 2013, fewer than 15,000 refugees from the entire African continent were resettled.
Click here for entire article.
Posted by dknit at 12:11 PM