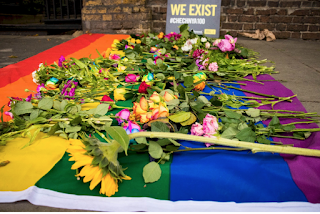 One man told Amnesty International that he knew of a gay man who was shot by his relatives and not given a burial. “For a Muslim, having no funeral is particularly hard. It’s as if this person has never existed, that no-one has the right to remember him.”

But gay Chechens do exist. They are real, and they are in desperate need of real help.
Since the story broke, Amnesty International activists from all over the world been coming together in defiance of the authorities’ senseless denials, to express their support and solidarity with gay people in Chechnya.

Last week we handed in more than half a million signatures to Russian embassies around the world, demanding an end to this horrifying persecution and a proper investigation into the allegations.

Posted by Melody Scherubel at 12:38 PM