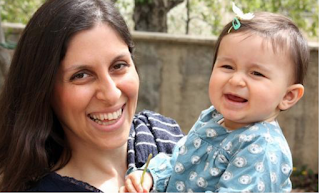 Despite thousands of you demanding that the UK government take action for Nazanin Zaghari-Ratcliffe, they have never publicly called for her release nor condemned her mistreatment in prison. To this day, she remains behind bars,being sentenced to four more years of this nightmare.

Now we’re shifting gears and hoping to influence individual MPs to raise their voice for Nazanin.


Nazanin is not the only British-Iranian held in Iran under false charges. 77-year-old Kamal Foroughi has been suffering inside a prison cell for over six years – on charges of ‘espionage’. He has been eligible for release since 2014 but the Iranian authorities continue to hold him.

CLICK HERE for MORE INFORMATION
Posted by Melody Scherubel at 8:04 AM