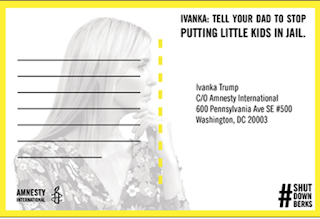 Candles, birthday cake, presents, friends and family. That’s what every parent hopes for their child’s birthday. Instead of festivities, Tomás spent his eighth birthday behind bars—for the second year in a row.

The reason why? Because Tomás and his mom were jailed in the only place in the country where you can hold a child who has never committed a violent crime for over 600 days: Berks Country, PA. Tomás and his mom, Natalia, are amongst at least 60 other moms, dads, and children who were locked up after seeking safety here, though they fled from violence in their home countries.

Today, we’re calling on Ivanka Trump to join us in the fight for kids like Tomás. Ivanka campaigned for her father on a commitment to support kids and mothers—shouldn’t that include all kids—even the ones at Berks?

CLICK HERE to Send Message to Ivanka
Posted by Melody Scherubel at 11:16 AM