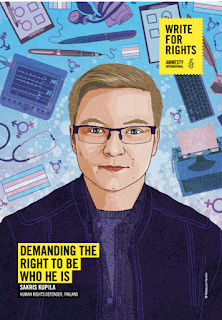 Sakris was a teenager when he realised that the gender he was given at birth doesn’t express who he is.

Since then, he has faced many challenges in Finland. First, he needed to be diagnosed with a “mental disorder” in order to change his name to one that he felt better matched his identity. Then he learned that in order to have his gender legally recognized, he would also need to be sterilized.

"It felt like I was categorized subhuman based on my gender identity. I felt sick."

Despite facing intimidation and threats, Sakris is bravely campaigning for a fairer system for transgender people in Finland, so that nobody else is treated how he has been treated.

If the Finnish government ends these cruel regulations, transgender people will be able to live their lives with dignity, enjoying their right to be recognized for who they are.

Posted by Melody Scherubel at 10:43 AM