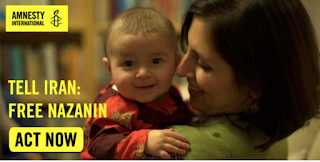 Nazanin Zaghari-Ratcliffe has been imprisoned in Iran for nearly two years on bogus charges. She hasn’t committed any crime.

Nazanin has been told that she could be charged again and face another trial imminently, which may result in an even longer prison sentence.

The UK government has called for Nazanin’s freedom, and Foreign Secretary Boris Johnson has said he’ll do all he can to secure her release. Now we need the Iranian authorities to let Nazanin return home.