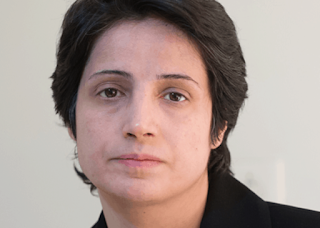 PEN AMERICA, September 19, 2020.
As the United Nations marks the opening of its 75th anniversary General Assembly, Iranian activist and writer Nasrin Sotoudeh will mark the 42nd day of her hunger strike. Sotoudeh, Iran’s leading women’s rights lawyer, is demanding the release of political prisoners during the COVID-19 pandemic. Who is the woman described as Iran’s Mandela? Why does the situation of Sotoudeh and Iran’s political prisoners matter? And why must the world’s leaders, gathered at the UN, defend the UN Charter—principles of law, rights, dignity, and freedom—reflected in the plight of one woman? Join PEN America and Convisero for our panel on Sotoudeh’s urgent and dire situation, and the importance of her case and her advocacy in a global context.
This event is in support of PEN America’s petition demanding Sotoudeh’s immediate and unconditional release, signed among many others by Ayad Akhtar, Kwame Anthony Appiah, Hillary Clinton, Geralyn Dreyfous, Khaled Hosseini, Kweku Mandela, Azar Nafisi, Samantha Power, and Gloria Steinem.
CLICK to SIGN
Posted by Melody Scherubel at 3:37 PM