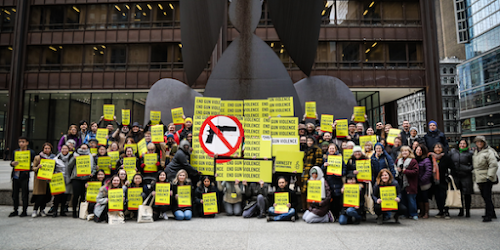 This Labor Day weekend, there were more than 57 shootings in Chicago. Already this year, there have been more shootings in New York City than in all of 2019.

Horrifically, shootings have notably risen in other cities across the country with seemingly no end in sight, and no substantial action by our policymakers.

Exacerbated by COVID-19, gun violence is killing hundreds of people each month — and just like the pandemic, it is disproportionately harming Black communities and communities of color.

Say it with me: gun violence is a human rights crisis in the United States. And if we are going to address — and solve — it, we MUST address the underlying causes, exactly how we would any other crisis.

Amnesty has been fighting tooth-and-nail to apply pressure on Congress to invest $150 million in community-based prevention and intervention programs and pass into law substantive reforms, like the Break the Cycle of Violence Act. This July, in part due to pressure from Amnesty members like you, the House passed an appropriations bill containing an increase in funding for these programs — but the fight isn’t over. We need the Senate to do the same before it’s too late. Demand your two senators support increased funding for gun violence prevention programs this year.

Communities of color in the U.S. have suffered generations of marginalization and disinvestment, contributing further to the disparate impact of gun violence. But the solution isn’t more policing. Instead, we need to invest in the programs that have already been proven to work: supporting individuals most at risk of being involved in gun violence through street outreach programs, group violence intervention strategies, and other community-led approaches.

These approaches are evidence-based ways to save lives — but right now, many of the community organizations that champion this work are struggling to keep afloat because of the pandemic. What’s worse, even when these programs have been most successful, they’ve been defunded, leading to a resurgence of violence. If Congress fails to make a long-term commitment to violence-reduction, we will lose even more people to the crisis of gun violence.

Thanks to the relentless advocacy of activists like you, the House of Representatives just increased funding for community-based gun violence prevention in July. But that’s not the end of the fight. Now, we’re turning our sights to the Senate — your senators need to know where their constituents stand.

This is literally a matter of life and death for so many. Thank you for your voice in this fight.