IRAN: In Their Own Words, PODCAST 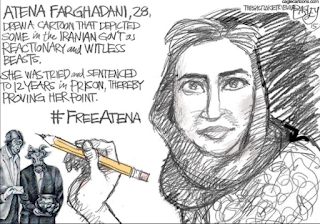 In 2014, 30-year-old Atena was arrested for a cartoon that she had drawn a few months previously. The art student had depicted members of the Iranian government as monkeys in parliament, in response to new government plans to significantly roll back women's rights and reproductive rights for all in the country.

"My cell had no window and no toilet. It was only about 3ft wide and 5ft long, so as I leant against the wall, my feet could stretch out and touch the wall opposite me. It was infested with insects. It absolutely felt like I was in a grave."


CLICK HERE to Listen
Posted by Melody Scherubel at 9:15 AM