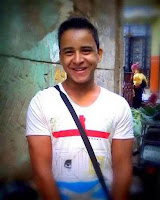 
Egyptian student Mahmoud Hussein, a prisoner of conscience, was beaten by prison guards on 14 July. He has been tortured during the more than 500 days he has spent in pre-trial detention for wearing a T-shirt with the “Nation Without Torture Campaign” logo.

Mahmoud Mohamed Ahmed Hussein, a 19-year-old Egyptian prisoner of conscience, was beaten on 14 July by two prison guards who had stopped him from taking his belongings with him to a new prison, according to his brother, Tarek Tito. He was told he would be taken to a new prison, but remains held in the Appeal Prison in Cairo.

Click here for more information and addresses.
Posted by dknit at 5:52 AM