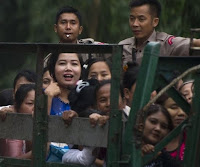 Amnesty International
July 30, 2015
“We are delighted that these 11 men can now walk free and return to their families, even if nothing can make up for the ordeal they have had to go through. But the fact remains that none of them should have been imprisoned in the first place,” said Rupert Abbott, Amnesty International’s Research Director for Southeast Asia and the Pacific.
“We have seen an alarming increase in arrests and harassment of peaceful activists in Myanmar in the past year, with an increasing number of prisoners of conscience languishing behind bars. Releases like the one today will have little long-term effect if the laws that allow the authorities to crackdown on human rights defenders, students, journalists and government critics remain on the books.”
“Myanmar’s authorities have a track record of announcing prisoner amnesties, like the one today, at politically opportune times. The government must prove that this is more than an empty gesture to curry favour ahead of the November elections. The next step must be to release the scores of peaceful activists who still remain behind bars, and to drop charges against those facing imprisonment simply for peacefully exercising their human rights,” said Rupert Abbott.


Click here for entire article.
Posted by dknit at 7:05 AM