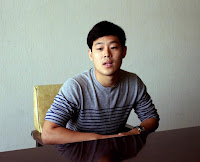 
South Korean student Joo Won-moon is at risk of a long prison sentence and possibly torture and other ill-treatment after having been detained by North Korean authorities in April. No information on a trial has yet been announced.

Joo Won-moon, a 21-year-old South Korean student, was detained by North Korean authorities on 21 April. He had crossed into North Korea on foot near Dandong, China. He was most recently living in the United States and was traveling in Asia while taking a break from his studies.
Click here for more information and addresses.
Posted by dknit at 6:36 PM