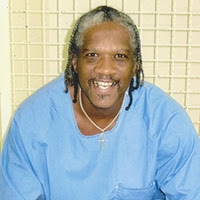 Kevin Cooper has been on death row in California for more than thirty years.
In 1985, Cooper was convicted of the murder of a family and their houseguest in Chino Hills. Sentenced to death, Cooper's trial took place in an atmosphere of racial hatred — for example, an effigy of a monkey in a noose with a sign reading "Hang the N*****!" was hung outside the venue of his preliminary hearing. Cooper has consistently maintained his innocence. Following his trial, five federal judges said: "There is no way to say this politely. The district court failed to provide Cooper a fair hearing."
Since 2004, a dozen federal appellate judges have indicated their doubts about his guilt. In 2009, Cooper came just eight hours shy of being executed for a crime that he may not have committed. Stand with me today in reminding the state of California that the death penalty is irreversible — Kevin Cooper's sentence must be commuted immediately.

Click here for ONLINE PETITION.
Posted by dknit at 10:01 AM