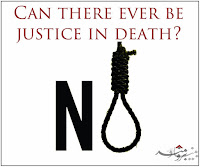 Human Rights and Democracy for Iran
"Over the last several months, the number of Iranian prisoners executed has skyrocketed as Iran empties its prisons into graves in blatant disregard for the rule of law. For this invisible and appalling race, which has taken 688 lives so far in 2015[1], 132 in June alone, Iran deserves no respect."
"To be truly respected, Iranian leaders have to do more than give proud and impassioned speeches or try to convince Western diplomats of their respectability in the hallways and at the dinner tables in luxurious hotels in Europe. They must work hard for real and fundamental changes to establish the rule of law and end impunity. If the international community believes in the values entrenched in the United Nations Charter and other international treaties, if they hope for long-term cooperation with Iran and stability in the region, they should hold the Islamic Republic’s leaders accountable for ignoring their human rights obligations and call on them to cooperate with United Nations experts and revise their laws and practices. And they should increase the political cost of this latest death race and bring it to an end."

Click here for entire report.
Posted by dknit at 5:11 PM