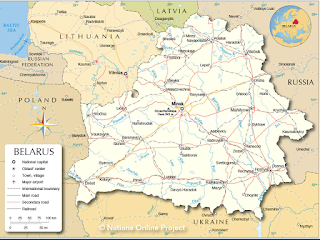 
The death sentences of Ihar Hershankou and Siamion Berazhnoy were upheld by the Supreme Court of Belarus on 20 December 2017. The two men were convicted and sentenced to death..on 21 July 2017. In the likely event that their appeal for clemency is rejected...both men will be at risk of imminent execution.

In Belarus, no notice is given of the date or time of execution; no final meeting with relatives is granted.  In accordance with Belarusian law, their bodies are not returned to their families for burial, nor is the location of the burial site disclosed.
Belarus is the only country in Europe and Central Asia which continues to implement the death penalty. Amnesty International opposes the death penalty in all cases without exception as a violation of the right to life, as proclaimed in the Universal Declaration of Human Rights, and the ultimate cruel, inhuman and degrading punishment.
CLICK HERE to TAKE ACTION
Posted by Melody Scherubel at 7:30 AM