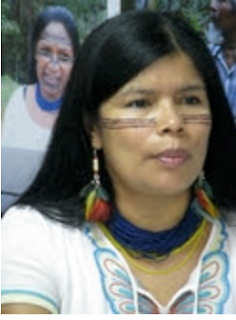 Patricia Gualinga, Indigenous human rights defender, reported that on 5 January an unknown man attacked her home in Puyo, Pastaza province, throwing stones at the windows while yelling death threats against her.

Patricia Gualinga is a Kichwa leader of the Sarayaku Indigenous Peoples, whose ancestral lands are located in eastern Ecuador. She works to defend rights related to land, territory and the environment in the context of extractive projects in the Ecuadorian Amazon...
Many Indigenous leaders and human rights defenders have expressed their concerns regarding the effects that oil exploration and extraction could have on their lands, territories and water sources and have previously reported threats and harassment as a consequence of their human rights work. In December 2017, after days of mobilizations and a meeting with the Ecuadorian Confederation of Indigenous Nationalities (Conaie), President Lenin Morales promised the suspension of new oil and mining concessions in Indigenous lands that have been accorded without “prior consultation”.


CLICK HERE to TAKE ACTION
Posted by Melody Scherubel at 8:06 AM