IranWire
December 2, 2016
The Royal Society of Medicine has published a key study into Iranian journalists’ wellbeing and the severe trauma and psychological damage they experience on a regular basis.
The study, by Dr. Anthony Feinstein, a professor of psychiatry at University of Toronto, looks at post-traumatic stress disorder (PTSD) among frontline Iranian journalists. It was commissioned by Journalism is Not a Crime, IranWire’s sister organization.
“The part that surprised me about the results were the high levels of stress that the Iranian journalists confront,” Dr Feinstein said about the study.
The report, “Iranian Journalists: A Study of Their Psychological Wellbeing,” which was conducted over a three-year period, found that Iranian journalists suffer high levels of depression, anxiety and trauma as a direct result of their work and how they are treated. They face arrest, intimidation, and torture, and their families are regularly harassed. Journalists were encouraged to share their experiences via a secure website.

Click here for ENTIRE article.
Posted by dknit at 9:43 AM

Through phone and in-person interviews with witnesses and analysis of video footage, photographs, and posts on social media, Human Rights Watch documented government helicopters dropping chlorine in residential areas on at least eight occasions between November 17 and December 13, 2016.


Posted by Melody Scherubel at 8:30 AM

Loghman Sawari, an Iranian refugee, faces criminal charges in Papua New Guinea for allegedly using false information to obtain a passport to seek asylum in Fiji. Deported back to Papua New Guinea without due process, he was held incommunicado for 30 hours. Loghman Sawari remains in custody, amid grave concerns for his safety. 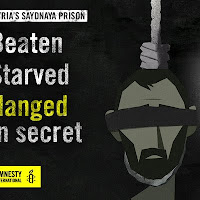 Every week in Syria's Saydnaya prison, 20-50 people are hanged. Don't let the authorities get away with murder. The murder, torture, enforced disappearances and extermination carried out at Saydnaya since 2011 have been perpetrated by the Syrian authorities as part of a systematic attack against the civilian population. Amnesty International reported on the mass hangings at the Syrian prison, Saydnaya Prison. 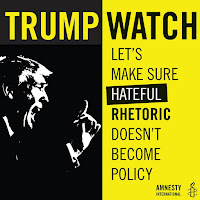 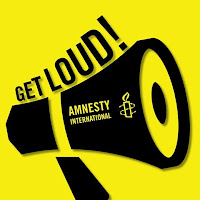 Thank you for your patience as our group's Media Campaign transitions and evolves. We would like to welcome Melody to the Media Team. She and Azam will be doing the lion's share of the work regarding our website, Facebook, Twitter, and Weekly Update. Our goal has been to (1) distribute human rights information and (2) encourage our members and the public to take action. We thank the team for the time they have spent to learn the technical aspects of website maintenance and social media outreach. If you are interested in volunteering and being a part of this team, please contact Azam at azamnrad@gmail.com. You do not need to be in the Madison area to be on the team. The work can be challenging, creative, and rewarding!
I would also like to thank Farideh and Wayne for their continuing contributions. If any of our members would like to share human rights petitions, events, videos, or books with our group, please send an email to Azam. The Media Team will look them over and post if appropriate. Thank you so much.
We now have about 70 members in our Group #139. Welcome to our newest members: Gabriel, Janan, Mahnaz, Rosanne, Jennifer, Erica, Zohreh, Elika, Moldy, Ali, and Elike (#2). Image the effect we would have if each and every one of us signed a petition or wrote a letter today.  That would be awesome!!!
Here are some actions that you can take right now: (1) Write letters on behalf Amnesty International Urgent Action cases, (2) Tell Senate. Oppose the Muslim Ban Online Petition, (3) End the horror in Syrian prisons Email Action, and (4) URGENT Refugees are Freezing on Greek Islands Online Petition. One of the top news stories this week came from Amnesty International. They reported on the mass hangings at the Syrian prison, Saydnaya Prison. Another news story that did not receive as much coverage comes from Iran and reports on the daily executions that are taking place.  Happening RIGHT NOW... Amnesty Action taking place right now in front of Trump Towers. Click here for video.
As you may have noticed our weekly list of links is missing from this Weekly Update. Here are some links from our website. Also check out our Facebook page which has been updated during this transition. We hope to have everything (website posts, Facebook, Twitter, and Weekly Update) up an running at full speed again soon.
Peace to All,
-Debbie
Posted by dknit at 11:29 AM

Iran Human Rights (FEB 3 2017): According to reports compiled by Iran Human Rights, the Iranian authorities hanged 87 people in the month of January 2017, including two juvenile prisoners and six prisoners who were executed in public. Out of the 87 executions, only 19 of them were announced by official Iranian sources. Most of the executions which were carrieed out in Iran in January 2017 were for drug related charges.

Click here for more information.
Posted by dknit at 10:50 AM