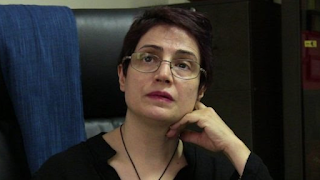 Amnesty International, USA, February 24, 2020.
Nasrin Sotoudeh, a prominent Iranian human rights lawyer, has been sentenced to 38 years in prison and 148 lashes because of her work defending women's rights & protesting against Iran’s forced hijab laws.
The new sentence of 33 years in prison brings Nasrin’s total sentence - after two grossly unfair trials - to 38 years in prison. Nasrin has dedicated her life to peaceful human rights work, including defending women who peacefully protest against Iran’s degrading forced hijab (veiling) laws.
Women and girls in Iran are not allowed to leave their homes unless they cover their hair with a headscarf and cover up their arms and legs with loose clothing. Nasrin wanted to change this and she was jailed for it.
CLICK HERE to TAKE ACTION
Posted by Melody Scherubel at 1:45 PM 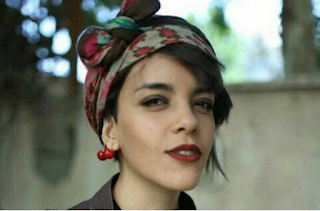 Aryani, a young Iranian human rights activist, has just had her sentence reduced from 16 years in prison — to nine years and seven months.
We’ve been mobilizing our global movement on Yasaman’s behalf — putting our energy and expertise to work to bring her home.
It seems like the Iranian authorities are listening to our voices. But even one more day in prison is one too many. We must leverage this moment to demand her unconditional and immediate release.


CLICK HERE to TAKE ACTION
Posted by Melody Scherubel at 11:02 AM 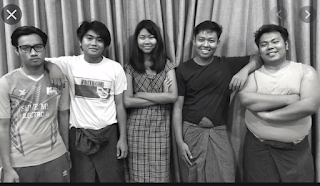 Three members of the Peacock Generation, a satirical performance group in Myanmar, have been sentenced to six additional months in prison for “online defamation” after sharing their performances critical of the military online. Six members of the group are now serving prison sentences of between two and three years in connection with their peaceful activities; at least three are facing further charges before different courts. All six are prisoners of conscience who should be immediately and unconditionally released.

Posted by Melody Scherubel at 9:26 AM 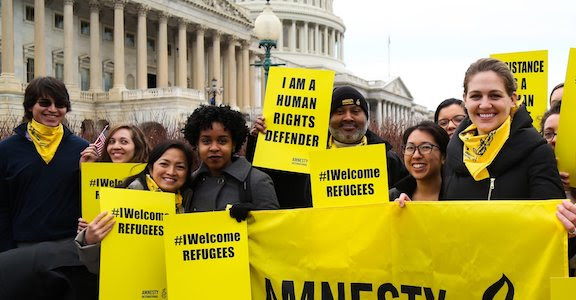 Human rights should be at the forefront of our domestic and foreign policy. We invited 2020 presidential candidates to explain how they would address some of the most pressing human rights issues of our time.

In June 2019, we gave presidential candidates the opportunity to tell us how the United States should respond to some of the most pressing human rights issues at home and around the world – ranging from the global refugee crisis to the epidemic of gun violence in our communities.

Amnesty International USA reached out to all major presidential campaigns to respond to this questionnaire. Twelve candidates answered our questions by our deadline.


CLICK HERE to view the candidate's responses
Posted by Jacob Pankratz at 3:42 PM

Just days after the Muslim ban’s third anniversary, the Trump administration continued its attack on immigrants by expanding this hateful ban to include six more countries.

WHAT IS THE NEW EXECUTIVE ACTION?
Already, the administration bans nationals of five Muslim-majority countries – Iran, Libya, Somalia, Syria, and Yemen , as well as North Korean and Venezuelan nationals, from travel to the U.S. except under special circumstances, which can be extremely difficult if not impossible to meet.

Like the current ban, this expanded ban does not affect refugee resettlement, but continues to affect people seeking safety – those trying to leave countries like Yemen and Myanmar, etc., and some asylum-seekers – people blocked from traveling on visas to the U.S. who would then have asked for asylum once here.

This new order is nothing new: it’s the same hate and fear in a different package.  Instead of making our country safe, these policies have endangered thousands of lives, torn families apart, and abandoned values long cherished by so many in the U.S.

While we can expect this new ban to be challenged in court, Congress must step up to prevent the administration from carrying out these inhumane policies by passing the NO BAN Act.  This is not who we are, and we will not stand for this.  It’s time to end the ban once and for all. #RepealtheBan.  #NoMuslimBanEver.

WHAT IS AIUSA DOING?
Following the lead of impacted communities and coalition partners, AIUSA is implementing a rapid response plan with the goal  of generating press and online coverage; driving pressure on our Members of Congress to pass the NO BAN Act, which would repeal the Muslim ban and other harmful policies restricting the right to seek asylum and affecting refugees and migrants; and engaging activists through an online action, SMS, and distribution of No Muslim Ban Toolkit and an “50 Ways to Take Action” Guide. I’ve also attached the toolkit for convenience.

Already, on January 28, we held a press call centering the advocacy and voices of the communities leading the work to repeal the ban and attended by the New York Times, Reuters, Voice of America, Huffington Post, VICE, and Columbus Dispatch.

WHAT CAN YOU DO?
https://www.amnestyusa.org/no-muslim-ban/

Sign our action calling on our Senators and Representatives to pass the NO BAN act. Sign here:http://bit.ly/SayNoToBan.
Print a poster and make some noise with our No Muslim Ban Toolkit and “50 Ways to Take Action” Guide. Check out the No Muslim Ban Ever web site to find community actions across the country.

Posted by Jacob Pankratz at 3:38 PM 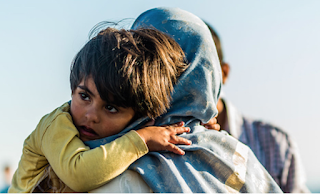 The Trump administration has once again made it clear that it intends to turn its back on people in need of safety and a new home — and is willing to implement policies that needlessly target nationals of entire countries.

It is past time for our elected officials to rescind all versions of the Muslim ban — and other dangerous and discriminatory policies blocking children, families, and individuals from coming to the U.S. We need urgent action to undo these xenophobic policies that masquerade as security measures!

Posted by Melody Scherubel at 8:51 AM