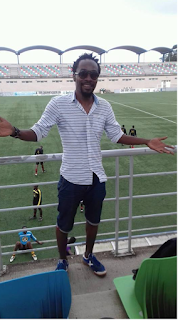 
Ramón Esono Ebalé, a cartoonist and activist from Equatorial Guinea, continues to be detained without charge at the Malabo prison of Black Beach. Detained on 16 September after being arrested while leaving a restaurant in Malabo,  he has been accused of heading an organisation involved in money laundering and counterfeiting money.
On 9 October, Ramón’s lawyers submitted a request to the court asking for a hearing with the prosecution witnesses in order to prove that they are giving false testimony, after which the Court could determine whether or not to charge Ramón. However, the court is yet to respond to the submission and his lawyers are concerned that this is a delaying tactic the authorities are using to keep Ramón in prison. If the court does not respond to the submission by 30 November, which is when the judicial year ends, then Ramón could be in prison until at least 16 January 2018 when the courts resume their sessions.
Ramón‘s continued detention is believed to be in connection with his art work which he uses to critique the human rights situation in the country.
According to family and friends who have been visiting him, Ramón is in good spirits and in good health despite being imprisoned. He has also been given access to a pen and paper which enable him to continue with his drawing. Some fellow prisoners have even asked him to make drawings of them.
The Cartoonists Rights Network International has awarded him the 2017 Award for Courage in Editorial Cartooning.

Posted by Melody Scherubel at 3:45 PM