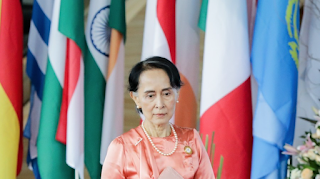 Myanmar leader Aung San Suu Kyi has been stripped of the Freedom of Oxford over her failure to halt the ethnic cleansing of the Rohingya. The Nobel Peace Prize laureate is accused of “turning a blind eye to violence.”

Suu Kyi was given the Freedom of Oxford in 1997 for her fight against oppression and military rule in Myanmar. She spent years under house arrest in Rangoon. However, she was stripped of the honor after a cross-party motion was unanimously passed during a special county council meeting in Oxford Town Hall.

Posted by Melody Scherubel at 2:43 PM