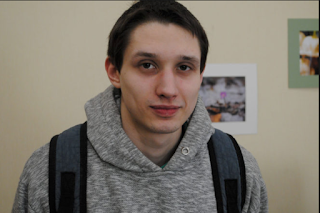 
In October 2016, activist Dzmitry Paliyenka was found guilty of “violence or threat of violence against an employee of law enforcement agencies” and “production and distribution of pornographic materials or items of pornographic character” and given a two-year prison sentence.
The charges, trumped-up, were related to a cycling event which took place in Minsk, the Belarusian capital, on 29 April 2016 to peacefully protest against restrictions on cyclists.
Since his arrival in prison in April 2017, Amnesty International has received consistent reports that Dzmitry Paliyenka has been singled out by the prison authorities and subject to harsh treatment. He is spending 10 days each month in solitary confinement...Mail posted to him is being withheld and letters are not being sent. His friends held a solidarity card-writing campaign for him at the end of December 2017, over the New Year period, but he has not received a single card.
CLICK HERE to TAKE ACTION
Posted by Melody Scherubel at 8:05 AM