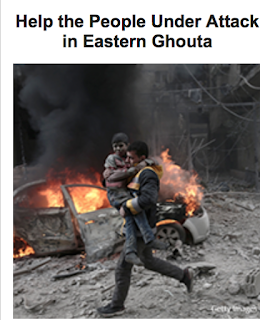 
The Syrian government, backed by Russia, is bombing its own people in Eastern Ghouta. Scores of people have been killed and hundreds injured in the past month.

This is not new for the people of Eastern Ghouta: people who’ve been trapped in a cruel siege for nearly six years are now being attacked daily, killed and maimed by their government. Children and elderly people are dying of malnutrition and lack of medication.

Tell the Syrian and Russian governments to end the attacks and lift the siege on Eastern Ghouta immediately.

The attacks must be stopped. Humanitarian aid must be allowed into Eastern Ghouta.

We succeeded in creating pressure and noise around the world for Aleppo – and we can succeed in helping the people under attack in Eastern Ghouta.

CLICK HERE to TAKE ACTION
Posted by Melody Scherubel at 8:13 AM