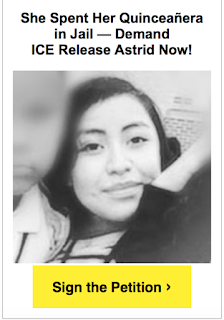 
Astrid was fourteen-years-old when she was asleep in her room on February 20th. She was awoken by six armed Immigration and Customs Enforcement (ICE) agents standing before her bed, yelling.

Astrid had gone to bed the night before expecting—as always—to go to school the next day. Instead she watched as her father Arturo was placed in handcuffs. They were then brought to the Berks County Residential Center with Astrid still in her pajamas.

Astrid just turned 15 two days ago, on March 15th. She had been eagerly planning her quinceañera before she was taken by ICE and sent to Berks County Residential Center. Astrid and Arturo came to the United States in February 2015 after fleeing harm in their home country because of their identity as Indigenous K’iche.

Posted by Melody Scherubel at 12:25 PM