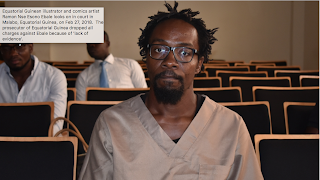 
On 7 March, Equatorial Guinean cartoonist and activist, Ramón Esono Ebalé was released from Malabo Black Beach prison eight days after the charge against him had been dropped.

Ramón went on trial on 27 February in Malabo after he had spent more than five months in pre-trial detention.  After the trial, the state dropped the charge of ‘counterfeiting money’ against Ramón. Ramón had formally been informed of the charge against him on 7 December 2017. The charge was dropped after the state’s main witness retracted his testimony against Ramón and admitted that he had been asked to accuse Ramón of counterfeiting activities.

CLICK HERE to READ MORE
Posted by Melody Scherubel at 8:19 AM