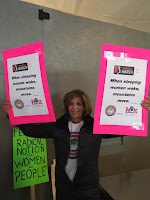 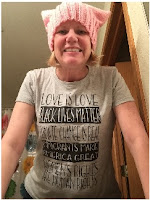 "When it rains... it pours." What a week! What an amazing two weeks!
For me, my mother was admitted to the hospital and almost didn't make it. She's at a rehabilitation center now and is doing well. I watched events unfold from her hospital room and became a March of One while wearing my t-shirt and pussyhat. I knitted 15 hats so... although my body was here, my heart and hats were in D.C. and two Sister Marches.
For our group, I have to thank our Group Leader, Azam, who marched in D.C. and also kept up our Facebook posts and Urgent Action links. My full attention was given to my mother and our family. Thank you!
I hope many of you were able to attend the Women's March on Washington or a Sister March. What an amazing sight! Amnesty International joined women's groups, environmental groups, social justice groups, and so many others to show the world that we will stand up and that "WOMEN'S RIGHTS ARE HUMAN RIGHTS." There are many photos and many links to videos of the marches. Here are just a few: (1) Women's March in Madison video, (2) Linda Sarsour's powerful speech at the Women's March On Washington video, (3) Ashley Judd speaks at Women's March on Washington video, (4) Images from around the world photos and (4) Estimates of Marchers video.
For our world, a palpable shift occurred. Amnesty International is a nonpartisan organization. We do not endorse one political party over another but we do stand up for human rights. For me, the Inauguration of the 45th President of the United States represents a call to action. It is now, more than ever, that we need to stand up, we need to sign petitions, we need to call, we need to write, we need to shed that light for human rights in the U.S. and around the world. The values influencing U.S. government policy have changed. Good trade deals may not include the recognition of human rights violations. Indigenous rights, immigration rights, women's rights, family rights, health care, prison reform, and environmental concerns may take a backseat if they "cost too much" or are deemed unworthy. Human rights are under attack and we must be vigilant... we must move forward with renewed energy and we must make our voices heard.
Please take action today!  Our Facebook posts have continued and our Urgent Action list has been updated. Send us YOUR photos. How are YOU taking action??? We will share them in our Weekly Update and put them on our website.
In Solidarity,
-Debbie
Photos include:
(1)  Margaret's daughter, Margaret Huang (AI USA), and Azam Niroomand-Rad in D.C.
(2)  Debbie Lloyd at Aurora Hospital
(3)  ​Farideh Kioumehr in LA
Posted by dknit at 8:52 AM