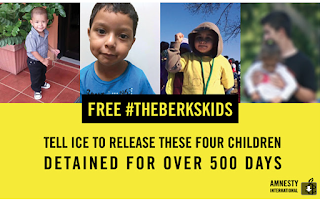 Antonio, Carlos, Josué and Michael and their mothers Marlene, Lorena, Teresa and Maribel (all pseudonyms to help protect their identities) are seeking asylum in the U.S. to escape horrific violence and abuse in their home countries. They have been held in detention for over 500 days and are currently in Berks County Residential Center in Pennsylvania.

Three-year-old Josué has spent over half his life in detention. He learned to walk and talk in confinement. Four-year-old Carlos asks his mother daily, “Why can’t we get out of here?”

All four children have been granted SIJS and have pending applications for legal permanent resident. To obtain SIJS, a state court determined that it is not in the minors’ best interest to return to his or her home country. Under U.S. law, a minor with SIJS is considered to have been paroled in the U.S. Three of them have already been issued their Employment Authorization Document, and their mothers are currently subject to stays of removal. Additionally, each of the four families have friends or relatives in the U.S. who are willing to take them in, and ensure their appearance at future hearings.


Despite their status, compelling grounds for asylum and protection, and serious mental and physical health concerns, ICE officials refuse to release these four children and their mothers. There is no justification under U.S. or international law to continue to detain these families.