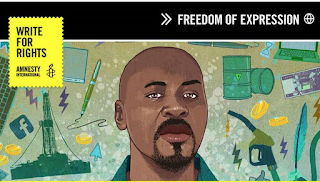 He’s an online activist and father of seven. In September 2016, Tadjadine Mahamat Babouri, commonly known as Mahadine, posted videos on Facebook. In them, he accused the Chadian government and people close to it of corruption and misusing public money.

Making and posting the videos was a bold thing to do in a country where speaking out like this carries serious consequences.

Within days, Mahadine was snatched from the street in broad daylight by a group of men believed to be intelligence officers. He says he was beaten, electrocuted and chained up for weeks, and moved from one prison to another. His wife and children were told nothing of his whereabouts and had to track him down themselves.

Mahadine now faces a life sentence, and faces charges including threatening national security. He is gravely ill, having caught tuberculosis in prison. He’s in need of urgent medical care and shouldn’t spend another moment in prison.