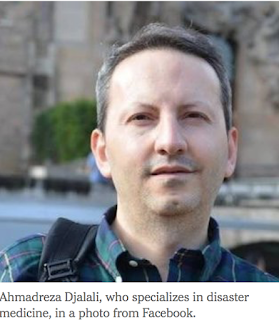 The medical doctor and university lecturer had studied and taught in Sweden, Italy and Belgium. Since his arrest in April 2016, several European officials have called for his release.

Zeynab Taheri, one of Ahmadreza Djalali’s lawyers, told Amnesty International that he was sentenced to death for the charge of “corruption on earth” (ifsad fil-arz), and has been given a 200,000 euro fine. The court verdict, which was shown to one of the lawyers, states that Ahmadreza Djalali worked with the Israeli government, who subsequently helped him obtain his residency permit in Sweden.

“Ahmadreza Djalali was sentenced to death after a grossly unfair trial that once again exposes not only the Iranian authorities’ steadfast commitment to use of the death penalty but their utter contempt for the rule of law,” said Philip Luther, Amnesty International’s Research and Advocacy Director for the Middle East and North Africa.

CLICK HERE to TAKE ACTION
Posted by Melody Scherubel at 7:32 AM